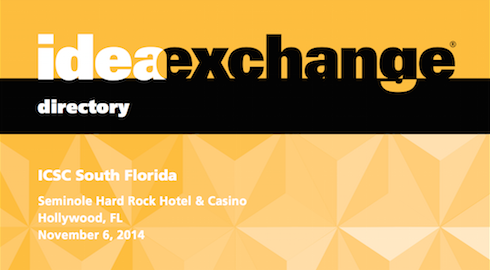 The morning session included a panel discussing South Florida development and retail acquisitions moderated by Ross Kirchman. Panelists include Stephen Bittel, Doron Valero and Bob Shapiro. This was a tremendous group of developers that have created billions of dollars in value over the last several years.

The take-away is that the real estate industry is cyclical. 10 years ago families were moving out to the suburbs and spending a lot of money. The highest unit of consumption is the young family. Weston is a prime example of this when it’s population dramatically increased after hurricane Andrew.

Now in 2014, the tenant sales are not as high as its peak and therefore it is hard to maintain or increase already high rents. As young children grow to be adults and move to the Urban Core, the household size decreases or the “empty nesters” move to the Urban Core as well to enjoy conveniences within walking distance. The young families that replace the ones that have moved out may not be as affluent, since what used to be a new house is now an older house.

While we were in a perfect storm for failure in 2008, we are the perfect storm for success in 2014 with oil at under $80, US Treasury under 2.5% and a lack of development over the past 5 years. Doron pointed out that we get more effected by “illiquidty” than interest rates rising when asked about interest rate risk for 2015/2016. While developers used to do ground deals that penciled out a 12% return on costs, today’s developers are penciling out an 8% return on cost with the hope to sell the deal at 6%.

Additionally, today’s developers are taking on a lot more risk due to closing on land prior to obtaining building permits. When considering development, consider that construction costs may increase tremendously depending on macro-demand for construction and additionally the cost of 4 – 5 years of your life working on all of the approvals and moving pieces needs to be factored in.

Later in the afternoon I lead a round table discussion about social networking and commercial real estate.  Below is the handout and outline of what we discussed.

Philosophy: Agents and Brokers are match makers. Every single available space or property has a match and will eventually get leased or sold. How fast and how well you are able to make the match is a measure of how good of a broker you are. You are 4-degrees of separation from everybody that you need to know to make the match. If properly used, Social Networking platforms will increase the speed and quality of your match making by 25%+. That being said, the art of actually closing the deal is another skill set entirely.

LinkedIn: Business oriented platform which excels at finding a specific person you want to reach and seeing if there are mutual connections to make the introduction better. The use of Groups focuses on a narrow subject (ie: South Florida Retail Leasing and Sales). Broadcast to your connections useful information to earn their attention. Do not accept connections unless there is some dialogue beforehand. In the future, LinkedIn may be your primary contact management system. LinkedIn users are the oldest with the highest incomes.

Facebook: Oriented to the mass-market. Has the most number of users, and on average, they are younger and earn less than LinkedIn users. Your connections are personal friends and family. There are special interest pages which focus on a narrow interest. Typically not used heavily for business and many of your connections may not understand your business.

Twitter: Users are on average the youngest and with the least income. Your connections can be the 230 million active users since users are looking for individuals as well as content which contain #hashtags of interest. When properly used, this can be a great source of the latest news as well as give accurate insight on the public’s general opinion on subjects.

Other Social Networking Sites and Uses

Yelp! – See how the restaurants in your property are doing or find great restaurants.

5 Things To Do Immediately

1.  Open personal and/or company accounts for all of the above platforms.
2.  All profiles must be as complete as possible. State your purpose in the  profile.
3.  Have a professional looking headshot as your profile picture.
4.  Join groups on LinkedIn which match your interests.
5.  Broadcast useful information and avoid too much self-promotion.

Scenarios which illustrates positive use of Social Networking

That being said, I am involved in purchasing, owning and operating shopping centers in Florida as well as providing expert 3rd party leasing and management for commercial real estate in the South Florida market. If you can help facilitate the growth, please let me know.

A few questions: How do we know each other or how did you find my profile? What is your involvement in the shopping center industry (if any)? Which projects are you working on currently?